Annie (Cari) Get Your Gun!

You never know what's going to happen when you're a North Idaho Wife. A couple weeks ago, one of my friends told me that her husband announced that they were going to pick out her birthday gift. Judging by the direction they were heading in the car, my friend began to get excited, just knowing they were on their way to Home Depot to pick out a Dyson Vacuum cleaner that she'd been wanting. As they drove, she was trying to decide which model she'd choose. Would it be the yellow one or the blue one? Apparently, it would be neither... she soon found herself at the gun show where her husband was taking her to pick out a new rifle.
In trying to console her, I shared my own story of receiving a .22 for Mother's Day. I had dropped some serious hints that I wanted a blender. When The Pastor presented me with a long, skinny box, I knew I was in trouble (or he was). To his credit though, he did also get me the blender. The day I got that .22, I didn't know just how fun it would be.
I surprised myself the other day while packing for our annual women's retreat. I was making a mental checklist as I put items in my bag. Socks...check, toothbrush....check, Bible....check. Ooh, I interrupted my own thought pattern. I can't forget my gun!
I laughed out loud at my own statement and the thought of anyone else hearing it. Only in North Idaho do you take your gun to a women's retreat. Actually, at the camp where we stay, they have a small rifle range with the little metal animals that fall over when you shoot them. (I'm sure there's an official name for those things, but I don't know what it is). Anyway, over the past few years, the women have had a ball shooting. 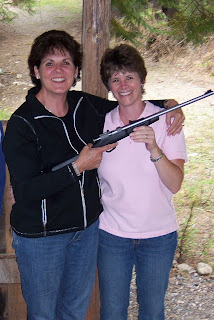 I'm sure if the men could see us they would cringe, but we all know the rules for safety and every now and then, we knock some animals over. We even got this year's speaker, a self-proclaimed city girl, in on the action. So for all you gals out there...when you're packing for your next retreat, give careful consideration as to whether or not you'll need your gun.

This Blog has nice gun pics which I love it....

Cash Online Get Easy cash at your door step