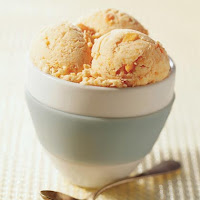 The Pastor likes the real thing. He's into butter, not margarine. He thinks the only "real" milk comes straight out of the cow (how gross is that?). A fire built with wood is the only way to go as far as he's concerned and he completely dismisses gas fireplaces that instantly ignite. He only likes to BBQ on charcoal...you get the idea.
I, on the other hand, am the exact opposite. I'll take "I Can't Believe It's Not Butter" over the real thing any day. I like my milk pasteurized, homogenized and any other "ized" they can do to it before it gets into my fridge. I love the convenience of a gas fireplace or BBQ. These types of issues sometimes create problems for us. (Would you ever guess that?)
The other night I bought "Light" Ice Cream. Because church members read this blog and I wouldn't want to cast The Pastor in a bad light, let's suffice to say he was not a happy camper. I argued that it was caramel brownie swirl and he would love it. I boasted that it only had 140 calories per serving. I tried to convince him that he wouldn't notice it wasn't "real" ice cream. I attempted to coax him out of his mood and into trying just one bite. He would have none of it. Literally.
He went into his office to pout...oops, I mean work, and I, in a last ditch effort to keep peace, sneaked out of the house and down to the mini-mart for some true blue ice cream. When I got home, I put both half gallons on the counter and began to dish. Ooooh, my caramel brownie looked so good and his plain vanilla looked a little boring. I dished up and took a bite. Mmm. Another bite. Hmm. That's an interesting flavor. Another bite. Gee, this doesn't really taste so hot. Another bite. Yuck. This is gross.
I didn't want to admit that mine was disgusting so I ate the whole bowl. Then, when The Pastor wasn't looking I took a bite of his. Much better. Dang. Oh well, at least I had the satisfaction of knowing I was saving precious calories....until I read the back of his carton.... 120 calories per serving. Double Dang.

Cash Online Get Easy cash at your door step