OK, I haven't tried this yet, but I can't resist passing this along. If anyone tries it before I do, I'd love to hear how it turned out!
5 MINUTE CHOCOLATE MUG CAKE
4 tablespoons flour
4 tablespoons sugar
2 tablespoons cocoa
1 egg
3 tablespoons milk
3 tablespoons oil
3 tablespoons chocolate chips (optional)
a small splash of vanilla extract
1 large coffee mug
Add dry ingredients to mug, and mix well. Add the egg and mix thoroughly. Pour in the milk and oil and mix well. Add the chocolate chips (if using) and vanilla extract, and mix again.
Put your mug in the microwave and cook for 3 minutes at 1000 watts (high). The cake will rise over the top of the mug, but don't be alarmed! Allow to cool a little, and tip out onto a plate if desired.
EAT! (this can serve 2 if you want to feel slightly more virtuous). 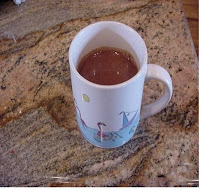 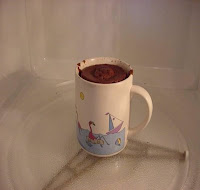 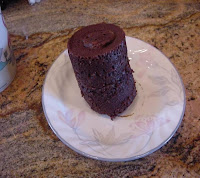 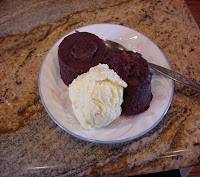 One Nation, Under God

I woke up overwhelmed today. As soon as my eyes opened, my mind began to race with all the things waiting for me to do today and the baggage leftover from yesterday. I staggered to my Mr. Coffee and poured a cup (thank goodness for automatic timers) and flopped down in my easy chair. Because I couldn’t settle my mind on where to begin my day, I did something completely uncharacteristic and flipped on the TV. I never watch TV in the morning before work, but the prospect of trying to cram something productive in before I had to get in the shower and get moving was more than I could bear.

I turned on the TV and Fox News was on, recapping events from yesterday’s inauguration, discussing the downward spiraling economy, and preparing to cover the prayer service which the Obamas would be attending at the Washington National Cathedral. It made me wonder again what the next four years will bring for our country and how President Obama will handle all that is ahead of him.

Realizing that the economy and the state of our country was more than I could process at 6am, and with a sudden desire to hear from the Lord, I turned off the TV and picked up my Bible. Because I was still feeling restless, I couldn’t even decide where to begin and made a quick decision to do the old trick of reading the “Proverb of The Day”. I opened to Proverbs 21 and started to read…

“The King’s heart is in the hand of the Lord. He directs it like a watercourse wherever he pleases.” Proverbs 21:1

I used this verse in a post not long ago, but thought it was appropriate as a reminder again that the same God who is in control of my own overwhelmed life is the same God who directs the course and leaders of our country. He has vested interest because, even though some try to deny it, we are still “One Nation, under God.”
Posted by Cari Johnson at 2:39 PM 4 comments:

The Results Are In...

OK, I've received a lot of responses to my Lego questions. I thought before I moved on to other blog topics that (just for fun) you'd like to hear what I consider to be the top feedback...

First, the vote was overwhelmingly in favor of one large Rubbermaid container. Dump all piece parts in and don't even try to keep them sorted.

Second, for consolation, my friend KH-Y, shared a photo of her Lego-covered living room that let me know I was not alone in my struggles. Of course, her living room looked perfect and there were a few assembled Lego creations on a designer rug and beautiful coffee table, so now that I think of it, I'm not sure how that made me feel better at all.

Third, I had one suggestion of throwing the Legos away and hope the son doesn't notice. Like that one's going to work. Nice try, Dad. We're waiting until you and Mom come visit to build this huge thing. It seems like a good "Grandpa/Grandson bonding" project.

Last, and I think the most truly helpful advice...take all the instruction booklets, punch and store them in a three ring binder. They key - I keep the binder and don't let it get lost in the abyss of the son's room. Excellent advice that I've already shared with a few other Moms who have tried keeping the booklets in the Rubbermaid container with not much success.

Well, I hope this is my last Lego related post, but I have a funny feeling this topic might come up in the future...
Posted by Cari Johnson at 7:51 PM 4 comments:

I have two questions about Christmas (and Birthday) presents:

1. Why is it important that a Nerf gun (or any other toy) be secured to the cardboard packaging by 5 dozen zip-ties and twisty wire things?

2. Could there possibly be any more toys out there with a minimum of 5,000 parts?!

If you have now, or have ever in your lifetime had kids with Legos, I'm begging you....please tell me what to do. They are overtaking my life. (the Legos, not the kid...although he's sort of overtaking my life, too).

I can't seem to throw them all in one big bucket because then the correct parts for each "thing" are all mixed up; I have to save the little paper instructions so I have even a remote idea of how to build the "thing" because my son is too small to figure it out alone; and furthermore, it seems to make sense that I would keep the instruction papers with their respective "thing" so that I know I'm building the right one.

If you've lived the Lego scenario before, I hear you snickering and laughing. The obviously sane answer would be to put each set of Legos and it's instruction book into zip lock baggies. In reality, you experienced Lego (and more importantly...kid) people, know that there's not a snowballs chance in you-know-where that will last for more than one hour.

I'm pretty darn sure that my answer is to buy a Rubbermaid storage container and dump every Lego I can find into it, but if you can save me from this insanity, please help!

Isn't that movie title? I have a different interpretation. Beneath meaning "underfoot". Underfoot meaning "on the bottom of your shoe". In my case, the answer to the question of what lies beneath is... dog poop. Yes it's true, pastor's wives occasionally are forced to use the word poop and I'll add that you should be thankful I didn't decide to call this post, "Crappy New Year".

On New Year's Eve I left work early so I could pick up some pop and junk food at the grocery story and still be home in time to tidy up and get ready for our party that was starting at 6pm.

I was heading home and feeling good about my preparations. I just needed to stop and pick up crushed ice and would still have plenty of time when I got home to prepare food and double check that the house was clean. Then the call from The Pastor came.

"The mini-mart, getting ice. Why?"

"Can you see if they have any carpet cleaner"

"Why?" I repeated nervously.

He sheepishly answered, "Well, I just stepped in dog poop."

Even more sheepishly he said, "I walked through the house with it on my shoe....actually several times, Umm actually, both shoes. It's everywhere."

It was an hour and a half until guests were to arrive. When I got home and opened the front door, the odor hit me like a brick wall. My entire house...the house I was hosting a party for over 20 people in (in one and half hours) smelled like a sewer treatment plant.

I spent my precious free time before the party not casually preparing plates of hors d'oeuvers, but frantically scrubbing poop out of the living room, lighting candles, spraying room freshener, mopping the kitchen, etc....

By the time people started getting there, I was exhausted. Only 6 hours til midnight and I wanted a nap. Luckily the efforts payed off and with the food, air freshener and open windows, the smell was eradicated with only a few throw rugs as casualties. I gave The Pastor a TPL (terrifying private lecture) about checking his shoes better before entering the house and all in all the night was a success.

I hope your New Year's Eve got off to a better start than mine. Crappy New Year! (sorry, I couldn't resist)

Set Yourself Up For Success

It's that time of year. Here come the resolutions and goals. Even if you won't verbalize them, I know you have them. I sure do. All the regulars come to mind; lose weight, spend more time in God's word, get serious about my writing career, etc... But over the past few days, I noticed a strange thing happening. As I think over my goals for the year, I find myself...

Eating Christmas cookies while reading up on Weight Watchers. Buying and previewing (while eating ice cream) workout DVD's, but not yet working out. Cleaning and organizing my home office where I write, but not actually writing anything. Reviewing Bible study materials online, rather than studying my actual Bible.

It would seem that I have good intentions, but so far, no movement toward accomplishment. In the past I've given myself quite a beating for acting like this, but this year, I have a different perspective. I'm choosing to be deliberate. I'm exploring my options before I jump into goals that I'll never keep. I'm testing, preparing, even practicing for the things I intend to do. I'm setting myself up for success, rather than failure.

The goals you and I have for 2009 won't just happen. So often we're frustrated because we rely on our willpower to make a change, but we've not done anything to help us prepare. We have the goal, but no direction, no plan, no path.

One of my favorite sayings (my paraphrase) is, " He who continues doing the same thing and expects different results, is a fool". When the new year rolls around, how often do we make the same resolutions time and time again? How often do we punish ourselves when we fall flat on our face? Yet, we haven't done one thing differently from years past.

This year, whatever your goals are, get the tools you need. Find the support you need. Don't follow the crowd, but find what works for you. Do your research, and most importantly, pray for God's strength rather than your own to help you accomplish them. Then...get to it! Set yourself up for success!