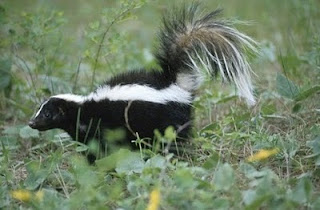 After two winters in a row of snow almost as deep as the roof of our house, I'm thrilled that so far, our December and January weather has been on the mild side. I'm holding out high hopes of an early spring. Today, I was given even one more reason to believe that my early spring predictions will come true.

In North Idaho, there are a few rules you learn to live by. You don't ask questions, you just believe the truths you're taught. "Don't plant your garden until the snow is off Baldy Mountain"; "Never call it 'Northern Idaho' or you'll be mistaken for a Californian"; and "Avoid the intersection at Boyer and Larch at any cost, unless you have an extra half-hour to kill." The list goes on, but you get the point.

Perhaps one of my favorite North Idaho truths is, "If you smell a skunk, spring is here." When I first moved to Idaho, I had to be educated in all things skunk. I'm from the city (at least comparatively) and didn't realize all the important skunk nuances. I've since learned that skunks hibernate. Now I know that when they disappear for winter, it's a glorious thing. (especially if you own a 5 pound Maltese dog that thinks he can take on every one of them.) But more importantly than the day they disappear, is the day they reappear.

Today I was driving to work and caught a whiff of something familiar. Most people would repulsively scrunch their nose and make a face at the smell. I, on the other hand, breathed it deeply, knowing the good news it brings. Then I noticed the "good news" wasn't going away. I began to get worried that I had hit the thing with my car and was somehow, unbeknownst to me, dragging it along with me. But finally the smell faded and I knew it was nothing more than a beautiful reminder that this was going to be a short winter.

However, once I got the office I found that not everyone shared my joy of the stinky. I work with our youth pastor's wife and as I wandered by her desk, she asked in a disgusted voice, "Did you smell that skunk this morning?" I instantly remembered that I had smelled the skunk just as I was passing Mr. and Mrs. Youth Pastor's house.

"Yep, I sure did!" I answered enthusiastically. "Isn't it great?"

"Not so great," she said. "Both of our dogs got sprayed and The Youth Pastor was outside in the cold and rain, up to his eyeballs in dogs and skunks, while the two kids screamed inside the house."

I didn't figure it was a very encouraging thing to say out loud, but the thought did cross my mind...one man's skunk is another man's treasure!

That was a good one Cari. Leona and I smelled a skunk last night.

Not to mention that there are puddles. Woot!

I have not heard that about skunks...but then again, I have been in North Idaho for only 8 years. LOL I will definitely remember that when I smell one, but so far, there hasn't been any stink around my house yet.

I think your little Maltese might still have some sense when dealing with skunks...Poppy will want to play with it!

Priceless! That was an awesome story!

Just for the record...I also heard birds chirping the other morning. AWESOME!