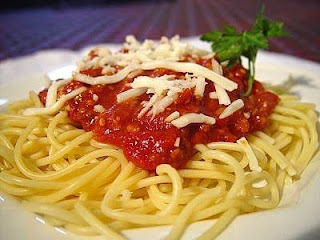 When The Pastor and I were first married, we lived in a rural community and he was interim pastor of a Conservative Baptist church. Most of the men in the church had an occupation and they were a farmer. The church was full of farm wives who really knew how to put on the spread for a Sunday dinner and as a young, newly married, 19 year-old pastor’s wife, I was super intimidated by their skill and the volume of food they produced.

We were constantly invited to dinner and I was terrified at the thought that I might have to reciprocate and have someone over for dinner. I could just imagine myself saying, “Thank you for having us over for slow roasted pork tenderloin, garlic mashed potatoes, grilled vegetables, homemade rolls and jam, and raspberry pie ala mode. Please enjoy this Kraft macaroni and cheese that I’ve slaved over for 10 minutes.”

However, after 20 years of marriage to The Pastor, I’ve learned to hold my own in the kitchen. My cooking is nothing to write home about, but since The Pastor and I continue to put on the pounds, I think I’m doing okay. At least I’ve (mostly) gotten over the fear of feeding other people. About a week ago, we had company for dinner. I had worked that day, so I figured I’d better make something relatively quick and easy and spaghetti seemed to fit the bill.

Our guest was in the living room visiting with The Pastor, the salad was made and on the table. The vegetables and spaghetti sauce were simmering, the bread was browning in the oven and the noodles were just finishing. I grabbed my plastic colander and dumped the cooked spaghetti in. Holding the colander over the sink, I gave it a couple of good shakes to make sure that the water drained out as much as possible.

As I gave it one last shake, I heard a small popping sound. The bottom of the colander fell out and I watched, stunned, as our dinner slid into the sink and straight down the garbage disposal. I’m not an expert in these things, but I was pretty sure that having the spaghetti noodles in the garbage disposal was going negatively impact my spaghetti dinner. It only took a split second for the shock to wear off and then I did what any red blooded housewife would do…I fished the spaghetti out of the drain, rinsed it off, and….just kidding. That would be gross.

Actually, I stared into the sink and then I began to laugh. And laugh. And laugh. Even though I don’t want to, I have to admit that the only reason I found this funny was because I knew I had another pound of spaghetti in the pantry. I had a backup plan. Had I truly been up the creek, I’m not sure I would have seen the humor in it.

But, it got me to thinking about life. Proverbs 31:25 says that a wife of noble character “…can laugh at the days to come.” That’s a little convicting. Sure, I can laugh when I know I have a backup plan, but when all my preparations are made and I’m sure things are going a certain way in my life, can I laugh when those plans suddenly go “down the drain” and I’m left wondering what just happened? I should be able to because I can be assured that God has a backup plan. And not only that, it wasn’t a backup plan at all—it was his perfect plan all along.

So if your life is feeling down the drain and you’re not sure why you’re left without any spaghetti, just remember that God has another box in the pantry and he’s got your situation fully under control. Go ahead—laugh at the days to come.

I'm sure my co-workers were wondering "what in the heck," when I'm sitting here @ my computer reading your blog and laughing out loud. That's a great one.
P.S. Uuuum, maybe you should invest in a stainless steel colander! :-)
Blessings...PD in CO

Ha! I know...The Pastor has been after me to get a new one for awhile, so I got a huge "I told you so" from him when this happened. I briefly thought of mentioning that my birthday is coming up, but decided against it because I didn't want to end up with 12 colanders! Happy Spring!

Awesome story ... great analogy! Thank you for this!