I know.  I spelled it wrong.  It's not Jackson Brown....It's Jackson Browne.  But, it's only Browne if you're talking about the singer.  I'm not. I'm talking about the Springer.  My puppy.  Aka Max, who didn't stay Max very long because when I brought him home he just didn't feel like a Max.  He really felt more like a Jack.  Our whole family liked the name Jackson and since he's a liver and white English Springer Spaniel, I thought the Brown was a nice touch.  Jack is settling in nicely and I think we're still in that honeymoon stage.  You know the one.  It's sort of like when you bring a new baby home and all it really does is eat and sleep so you can take it anywhere or do anything and people compliment you all the time--"What a good baby you have!"  We've had Jack all over town this afternoon and everyone is cooing, "Oh, he's such a wonderfully mellow puppy!"  Yeah.  We'll see about that, but so far, so good.  I'm sure he has some faults and very shortly you'll be seeing posts ranting and raving about this being the stupidest thing I've ever done, but what he may lack in any other area, he totally makes up for in cuteness. I'd love to go on and on about him, but it's been a long day and I expect some interruption to my sleep tonight, so without further ado, I'm pleased to introduce you all to Jackson Brown.... 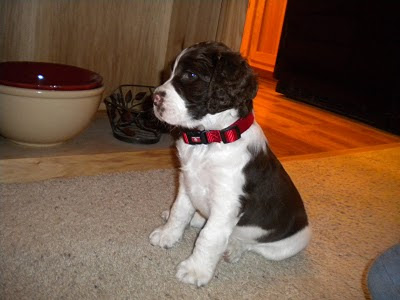 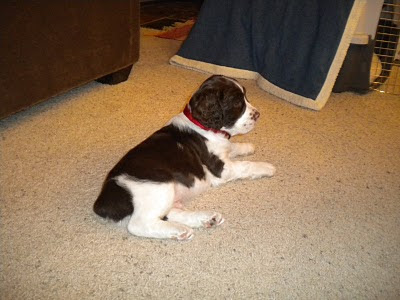 Everyone please add me to your prayer lists!  I think I'm in for a bumpy ride!

Oh my goodness, he is ADORABLE!!!