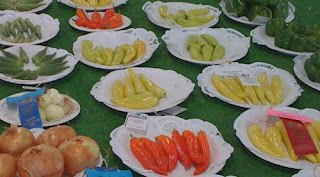 Even after 20 years of living in Idaho, there are a few things that I still haven't adjusted to.  One of them is the county fair.  I just can't suppress the city girl in me enough to understand why anyone would be interested in knowing who can grow the most uniform vegetables or what kind of art you can make out of an eggplant.

Another event I can't quite get my head around is the livestock auction.  I mean, I understand it's value for kids, learning responsibility as they raise and care for an animal; and then realizing the fruit of their labor as they sell the animal and make a profit.  That's all about profit and loss.  I get that.

What I don't get, is spending three times the fair market value for pork chops that I can get at Costco without having to pay and wait for them to be processed at the butcher shop. So imagine my surprise last weekend when I found myself almost going home with a 230 pound hog. (That's what you call em at the fair--hogs.)

It all started with the elephant ears, and I fully blame my friend, Jennifer for that part.  She's the one that said we had to get them.  Anyway, I'll cut to the chase and say that we ended up with three elephant ears.  One for Jennifer, one for her husband, and one for The Pastor, our son, and me to share. We settled into the bleachers to watch the livestock auction with deep fried goodness in our hand and the smell of cows and pigs in our nostrils.  Speaking of pigs, and being that I am one, I single-handedly ate most of my family's elephant ear and a frozen pink lemonade to boot.

The auction wore on (and on) and after awhile my stomach began to let me know that it did not appreciate being fed all that greasy, deep-fried junk food. It was about a gajillion degrees in the auction barn and I was getting hot and sick.  I eyeballed The Pastor's bidding number, which was laminated and just the right size for fanning myself, despite knowing the risk I would run waiving it around.  In desperation I decided it was worth the risk.  I would just hold it sideways while I fanned so the auctioneer couldn't read the number and I would fan very exaggeratedly so it was clear what I was doing.  That was my plan.

My heart started pounding and I ever so slowly lowered my "fan" while continuing to use it.  Keep fanning, I told myself calmly.  Don't make eye contact. He kept looking at me.  Keep fanning.  Stay calm. I lowered the fan even more and kept my gaze firmly on the floor.  It felt like time stood still and I wondered how badly The Pastor was going to yell at me for this.

When I couldn't take it any longer, I peeked up and looked at the auctioneer.  He was still looking my way.  I glanced over at The Pastor, who seemed completely oblivious to my plight, and then at Jennifer who didn't look all that worried either.  I was just about to ask The Pastor what I was supposed to do, when I noticed that the auctioneer wasn't looking at me, he was looking past me....at the man directly behind me....who had just bought the hog.

Next year, this city girl is skipping the elephant ears, the livestock auction, and maybe the fair altogether.  On second thought, maybe I'll just stay in the exhibit hall and check out all those lovely uniform vegetables.

You are hilarious, Cari! Loved, loved this post ... had me laughing throughout ... and I could just imagine how you felt thinking he was looking at you!