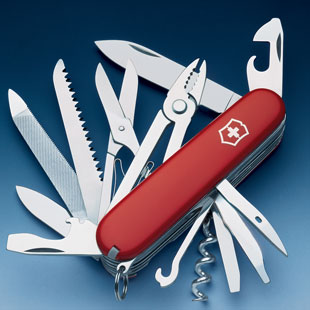 A few weeks ago I took a Hunter's Safety course with my son.  There's several good posts behind this story, but for now, let's just say that The Pastor conveniently had to be out of town for part of the class, so I had the, uh, honor of taking our son.

Among the disturbing videos that were shown (again, topics for another day), was one about hypothermia, heat exhaustion, and basic first aid.  It very accurately depicted someone with hypothermia becoming disoriented and disillusioned by his circumstances.  He began to panic and run around like a crazy man.  While freaking out, he threw off his outer clothing and other items that would have been helpful to him, and ultimately died.

Other video clips showed similar circumstances.  People who were confused and disoriented, acting irrationally, and getting themselves into trouble or even death.  The similarity in all the stories was that each person had, in their possession, everything they needed for survival.  They just weren't thinking clearly enough to use it.

2 Peter 1:3 tells me, "His divine power has given us everything we need for life and godliness..."  I have everything I need for life and godliness, right at my fingertips. God has given it to me.  It's right there.  I just need to utilize it.  But instead, I run around like a crazy person, panicking and acting irrationally, disregarding the very things that could help me, and ultimately getting myself in trouble.

Today, whatever circumstance you find yourself in, take a deep breath and clear your head.  Think about your savior Jesus Christ, and consider that, if you know Him...you already have everything you need.  Now use it!