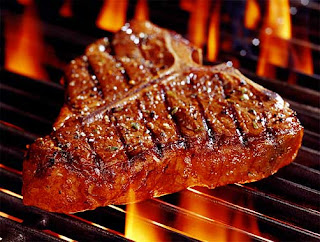 I must have had food on the brain when starting these last two posts.  Okay, let's be honest, I often have food on the brain, which is why, if I'm not careful, I'll be posting from the Fit Woman Fat Farm.  (Let's hope they have WiFi).

I'm a girl who likes to listen to music and lately I've been listening to a lot of worship and Christian music, but I've found myself disappointed and feeling a little flat that, while I've enjoyed the music, I've failed to have any overwhelming encounter with God as a result of it.  I mean, it always encourages me and often confirms my views and beliefs about God's character.  But, try as I might, lately, I just can't seem to get the spiritual insight and nourishment I'm longing for.

I was thinking about it the other day and realized just how long it had been since I tuned in to a sermon or some good teaching on the radio, rather than the music stations I'd been listening to of late.  And then I realized my problem.  Not enough meat.  I've been drinking a whole bunch of spiritual milk.  It has some nutritional value, but not all that I need.  I'm lacking protein.  I need some meat from the Word.  I've neglected my diet and I think it's time that I made some changes.

As I consider my diet and eating habits, I can't help but think I better have more steak and waffles.

Posted by Cari Johnson at 9:35 PM No comments: 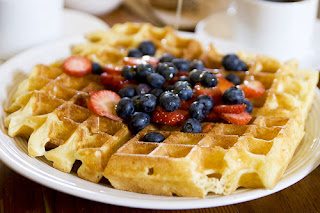 I remember a scene from when I my childhood. My mom was overwhelmed and freaking out. People were coming for dinner later that weekend, she had housework, laundry, and shopping to do. I remember calmly telling her it wasn’t that hard to figure out. She had plenty of time, she just needed to plan out her jobs and methodically do them. One thing at a time and she would be fine. I didn't understand what the hard part was.

Not long ago it was me who was doing the freaking out. My son observed my state of panic and said, “Mom, just think about one thing at a time. Be like a waffle.” Apparently he’s heard the “Women are spaghetti, men are waffles” analogy... don't ask me where.

It’s easy when we’re kids and don’t feel the weight of the world on our shoulders, but then again, we were never meant to feel that weight. Not then, and not now.

We are meant to give our load to Christ and do our part, which is to trust him to be faithful with one thing at a time. I only need to worry about what he's asked me to do for now. He is powerful and loving enough to take care of the rest. I am required only to love him and have faith like a child—just like I did when I was young and just like my son reminded me of recently.

It's lunchtime and I'm thinking...waffles.

Posted by Cari Johnson at 8:29 PM No comments:

Starbucks Did It To Me Again! 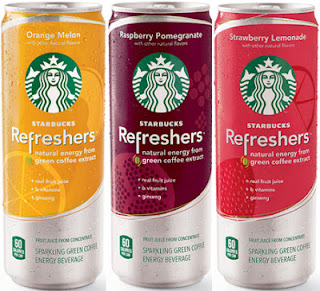 I don't understand how Starbucks can consistently come up with products that are so dang expensive, and yet I am more than willing to continue paying for them.  I suppose it's really not that big of a mystery.  They are delicious!  These Refreshers from Starbucks are my new afternoon guilty pleasure.  Created to compete in the energy drink market, these little guys claim to give a natural energy boost from green coffee extract and ginseng, but don't have any coffee flavor.  They are lightly carbonated and fruity.

I'm not an energy drink consumer, but I don't feel jittery after drinking a Refresher.  I'm not sure I feel any more "energy" than an afternoon cup of coffee or can of Coke.  I don't see these seriously competing with Red Bull, for those who depend on a real jolt, but I do know they taste awesome, and at 60 calories a can, that sure beats the aftertaste of Diet Coke.  You'll pay around $1.98 per can (give or take) for these little beauties, but they've been on sale everywhere because they're new, and I haven't paid more than .88 yet.  However, you can bet I'll be paying full price when the sales are done!  For now, you can go online and download coupons here and other places.

Posted by Cari Johnson at 6:07 AM No comments: 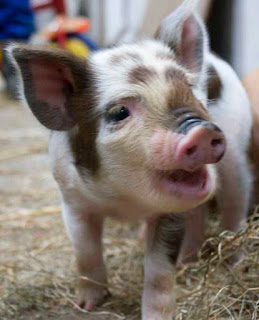 When I stop to consider my life, I continue to be amazed at just how different my expectations were from what my realities are.  I always figured I'd have a typical family...kids, a dog, maybe even a cat if I was feeling really adventuresome in life.  Never in my wildest dreams, did I ever consider that I'd be married to a pig pastor.

It was bad enough when the first pigs entered my life.  But, I consoled myself with the fact that they would soon be bacon and I'd be a lot happier, so I tolerated their existence with high expectations of BLT's and biscuits and sausage gravy.

However, I knew I was in trouble when The Pastor gussied up the pig house as part of the preparations for a recent family reunion, and I really knew trouble was brewing when he started talking about keeping one of the pigs and having piglets.

This week, that day arrived.  The Pastor is proud farmer to 11 baby pigs.  I have to admit, they are dang cute.  (though it looks like one, the picture above is not actually one of ours.  The heat light in our "Hilton-esque" pig house, makes the pictures all come out a fuzzy, strange hue of red. )

The Pastor has doted over those pigs day and night.  You'd think we just had our own baby when you consider the amount of sleep we haven't been getting, and to top it off, now he's talking about keeping two more mom pigs and expanding the pig house!

Please respond if you have any good bacon recipes.  This city girl is doomed.

Posted by Cari Johnson at 8:10 PM No comments: 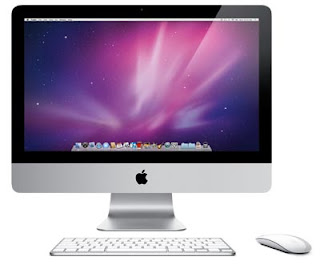 I'm officially a switcher.  Don't go gettin' all excited.  I'm talking strictly about my computing life.  After 17 years in the computer industry, I recently bought my first Mac.  A "switcher" is a PC user who has converted to Mac.  I've been using it for a few weeks now and all I can say is, "Wow!"  My only regret is that it's at home and I spend most of my day at work.

I agonized over spending the extra money for a Mac when I could buy a comparable PC for quite a bit less, but now that I've done it, I see the key issue is that they aren't really comparable. The Mac wins, hands down.  Although it has a few quirks that take getting used to, it's very simple to use and that was one of the key selling points.

You see, I told The Pastor that the Mac was for him and in light of the fact that he's not the most techie guy (major understatement), I should get him something easy to use.  Clearly the Mac was the best option and in his best interest. Surely he could see that I was buying thing purely out of love for him.

Posted by Cari Johnson at 1:00 PM No comments:

I Could Have Never Imagined... 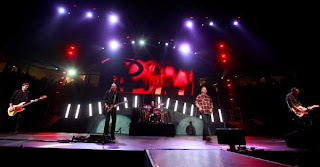 Sometime in late 2000 or early 2001, I received a sample CD with a few new artists and songs.  I didn't really love most of it, but there was a relatively new band called Mercy Me with a song called I Can Only Imagine, and I couldn't get enough of it.

At the time I was extremely pregnant with twins and after many years of trying to have a baby and a couple  of emotional miscarriages, I was not one of those women who loved the "experience" of being pregnant.  My goal was to get these kids born, hold them in my arms, and look into their tiny, miraculous faces.

Driving around, I would crank up the stereo in my Jeep Grand Cherokee (because at the time it was probably the nicest sound system I owned) and listen to I Can Only Imagine.  I understand the song is about seeing Jesus, but at the time, I could only imagine what it would be like to see my children face to face and walk beside them.  (well, push them in a stroller, but you get the idea).

Last weekend I went to the Rock and Worship Roadshow, a fantastic concert with an array of bands, the headlining one being Mercy Me.  Ten, plus years ago, I could have never imagined what it would be like to stand in that arena and listen to that song live, and I surely couldn't imagine what it would be like to do it with my son there with me.  I had longed to see his face and now we were worshipping together, side by side.  It was a bittersweet moment, overwhelmingly thankful for the son who was with me and desperately longing to see the daughter that was not.

But one day, I will see her again, and not only her, but even more, Jesus.  What a day that will be.  I can only imagine...

Posted by Cari Johnson at 7:20 PM No comments: