You Can Run...Well Maybe Not. 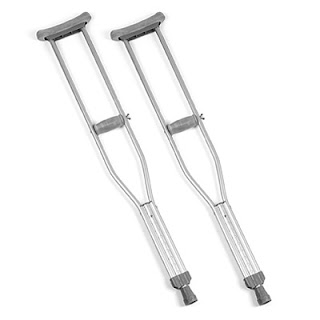 A lot of you know...The Pastor has been on crutches.  Chalk it up to a bone problem related to his Diabetes.  I won't get into the gory details, but let's just say that the crutches have been difficult for everyone involved, if you get my drift.

I don't blame The Pastor for getting weary of the crutches, and for the most part, he's been a good patient, "crutching" around as he should.  However, a couple weeks ago, we went out to lunch and tired of lugging them around with him, he left the crutches in the car, though he should have been using them.

He hobbled into the sparsely populated restaurant and before he could make his way to a table to sit down, he ran smack dab into...his foot doctor.  Oops.  The perils of living in a small town.

I've learned the hard way, there are some things you just can't run from.  (Especially when you're on crutches, but that's not my point.)  God tells me he shuts doors no man can open and opens doors no man can shut (Rev 3:8).  Simply put, if God wants to do something, he will do it, and no amount of whining, complaining, or running away on my part will change that. God will accomplish his purpose.

Lately God is calling me to some tough decisions.  I don't particularly want to make them.  My inclination is to run and hide until the whole situation miraculously works itself out without any effort from me.  But, I'm getting the distinct feeling that's not going to work.  I need to come face to face with the fact that God wants something of me. And if he wants it, one way or another, he will get it.  In the far corners of my heart and mind, I can hear him whispering, "We can do this the easy way or the hard way..."

The doctor has finally told The Pastor he can put down the crutches... and I think maybe it's time I take off my running shoes.