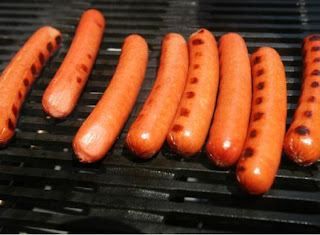 I've had a few life changing discoveries during my time here on earth.  The first one came when my son was very small and I realized, listening to one of his kiddie toys, that the ABC song and Twinkle Twinkle little star were, in fact, the same song.  Unbelievable!  I felt somehow cheated out of a song and dare I say, my whole childhood.

Now tonight, my second, and perhaps just as important discovery.  Hot dogs and bologna are the same thing, one is just squished flat and one is in a tube!  Luckily for me, I can claim ignorance because it's been more years than I can count since I ate a slice of bologna (thank goodness).  But my son has been on a kick lately and tonight, when he made me try a bite...the lights came on.

This makes me wonder how many other injustices and travesties of this nature are lurking out there and how long it will be until I discover the next one.  For now, maybe I'll go have a bologna sandwich with mustard and relish.  On second thought...I'm good.